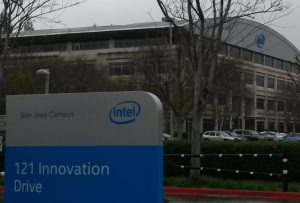 In November 2016 I got an Intel Hardware Accelerator Research Program (HARP) grant for the project “Harnessing the FPGA potential through GPU-like programming”. According to the call, the grant would be assigned to 30 research centers/universities worldwide, letting them access the new Intel CPU+FPGA (Broadwell + Arria10) MCP solutions.
In February 2017 I was invited to the Intel/Altera center in San José for attending a workshop about the new Intel/Altera CPUs. There I also had the chance of presenting nu+ and discussing the possible implications of GPU-like software programmable solutions for FPGA-based heterogeneous CPUs. 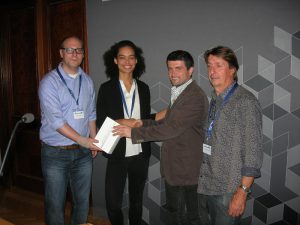 In 2015 I received the ALTERA Innovate Europe award, SoC category, for a project proposing an FPGA-based accelerator for Homomorphic Encryption. Key strengths were the potential implications of the idea on emerging FPGA-accelerated server scenarios, but also the gripping presentation delivered with the hardware design. This picture was shot during the award ceremony, hosted by the Field Programmable Logic (FPL) conference at the Royal Institution, London, UK, September 2015.

In 2011, I contributed to a project receiving the MBDA Innovation Award, assigned by MBDA to internal activities having the highest innovation impact. The activity was part of a contract I coordinated with MBDA dealing with an embedded controller of a radar antenna. 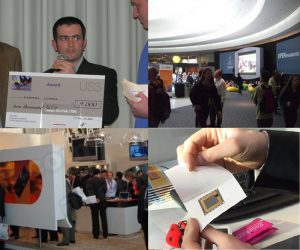 Since my university years, I’ve always been a Smart Card enthusiast. So, in the golden age of the Smart Card market (before they turned into a commodity product) I’ve been quite prolific in original ideas involving Smart Card and related technologies. In 2005 I got the eGate award, sponsored by Smart Card manufacturer Axalto (now Gemalto). The application was selected out of a large number of proposals (>100) by a committee of experts. I could present the prototype during the JavaOne exhibition in San Francisco, where Axalto had their booth. A year later, I won the SIMagine TIM Award, sponsored by Gemalto, along with my colleague Luigi Coppolino. The project presentation was hosted at the 3GSM Forum, now known as the Mobile World Congress, in Barcelona, February 2006. I had a great time explaining the application to hundreds of 3GSM Forum visitors as well as during the award ceremony, held in a theather rented by Gemalto for the purpose. Last, in 2008 I got a SIMagine Bronze Award for a fancy application based on the Near-Field Communication (NFC) technology, then still in its infancy. The application –the one I like most– was called TaggyTones and was based on the idea of distributing small digital contents, e.g. tones, as physical gadgets like a card, that users can just grab and tap on their phone. 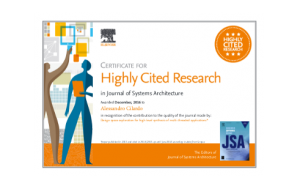 I’m not very keen on bibliometrics, but for the sake of completeness, I also put here this acknowledgment for a highly cited work on Elsevier Journal of Systems Architecture (JSA).  It’s my paper on high-level synthesis of multi-threaded (OpenMP) applications: A. Cilardo, L Gallo, N. Mazzocca, “Design space exploration for high-level synthesis of multi-threaded applications”, Journal of Systems Architecture, vol. 59, no. 10, pp. 1171-1183, 2013. I got this nice certificate from Elsevier.

2005 and 2004 I received two grants from the European Design and Automation Association (EDAA) supporting the participation at the DATE 2005 and DATE 2004 conferences, respectively.

Earlier in my career I received the 2003 Federcomin-AICA Award for the best thesis in Italy in the field of Information and Communication Technology (currently known as AICA-Confindustria award).

Theme by Anders Noren — Up ↑