Below I only describe those where I served / I’m serving as a Principal Investigator or Unit Coordinator.
MANGO 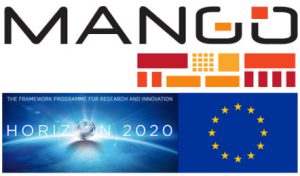 is a Horizon2020 European project where I’m involved very actively. The full project title reads “MANGO: exploring Manycore Architectures for Next-GeneratiOn HPC systems” (project ID: 671668). MANGO is one of the 21 large-scale projects that were funded in the context of the H2020-FETHPC-2014 call, aiming at preliminary exploration of new software/hardware technologies for HPC. It involves the Polytechnical University of Valencia (coord.), University of Naples Federico II/CeRICT, Politecnico di Milano, University of Zagreb, Philips Medical, Thales, École Polytechnique Fédérale de Lausanne, Prodesign, and Eaton as partners. In MANGO I’m part of the project core team and I serve as the WP3 leader for the University of Naples Federico II/CeRICT dealing with Architecture Exploration for Real-Time HPC. You’ll come across many news about my activities in MANGO in my blog.

RECIPE: REliable power and time-ConstraInts-aware Predictive management of heterogeneous Exascale systems is a follow-up European Project, directly building on the outcome of MANGO. 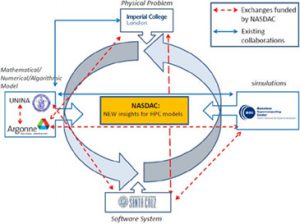 “NASDAC: iNnovative Approaches for Scalable Data Assimilation in oCeanography” (H2020-MSCA-RISE-2015 call, ID: 691184) is another Horizon2020 project where I’m involved as coordinator contact and team member, particularly for the WP dealing with the evaluation of emerging HPC architectures. NASDAC is funded in the framework of the Marie Skłodowska-Curie Research and Innovation Staff Exchange (RISE) programme, aimed at fostering knowledge sharing and networking around scientific computing and HPC. In fact, it involves important players in Europe, including the Barcelona Supercomputing Center, the Imperial College London, as well as the ARGONNE supercomputing center and University of California Santa Cruz in the US.

A previous project that I led as a Principal Investigator is “HtComp: Heterogeneous Computing in The Cloud: Enabling Tomorrow’s High-Performance Applications”. The project was co-funded by the Compagnia San Paolo and by the University of Naples Federico II. Nevertheless, the proposals were entirely evaluated by an external body, the European Science Foundation (ESF) . The competitive call was meant to select a kind of pre-ERC projects able to compete at the European level (in fact, part of the funding was provided under the condition of applying for a H2020 project). As a success story, part of the activities funded by HtComp, including exchanges and exploration of preliminary ideas, contributed to shaping the MANGO proposal, later approved as a H2020-FETHPC project.

In addition to the above projects, I received two grants in the framework of the Capacities Area/Research Infrastructures HPC-EUROPA2 European project (ID: 228398). The grants were essentially aimed at enabling HPC access through European mobility (at the Barcelona Supercomputing Center, BSC, in my case). The first grant revolved around “a HPC application for collision search in cryptographic hash functions” (Application ID: 253) and involved coding and optimizing a SHA-1 hash collision search program for MariCel, an experimental cluster of IBM CellBroadband engine processors (a popular and early example of heterogeneous architecture). Incidentally, the parallel search application led to an actual collision for 71-round reduced SHA-1 in May 2010, the first at the time. The second HPC-Europa2 grant revolved around “Evaluating GPU-based solutions for HPC collision search in cryptographic hash functions” (Application ID: 1268) and, as implied by the name, it aimed to port the previous code to a HPC cluster of GPGPU nodes.

Besides research projects, I also coordinated a number of projects and contracts with industrial partners including the Italian Aerospace Research Centre (CIRA), MBDA, Ansaldo STS, STMicroelectronics, and others, serving as the coordinator for most of them.

Theme by Anders Noren — Up ↑